In the latest version of the pattern (Version 1.14 07-07-20) I have made an improvement to the bell shaping of the sleeve cap. What motivated the change? How did the shape change? How different is it? How has the pattern changed? Here are the answers...

What motivated the change?

As I worked my latest sweater, when I got to the sleeve cap shaping, I noticed something that bothered me. The shaping usually is worked in three stages, each with different numbers of rounds between increases. For instance, the first stage may work increases every other row, the second work increases every third row, and the third every other row again. These three stages are intended to approximate the bell shape used in the caps of set-in sleeves. But sometimes, and in fact more often than I liked, one or even two of these stages had zero repeats. In particular the pattern I am currently working, had exactly one repeat in the first stage, 14 repeats in the second stage, and zero repeats in the third stage. That means there is almost no shaping and the cap has gotten reduced to having straight sides. We sometimes call that construction the "witches hat" sleeve cap, because it is flat across the top and has straight angled sides and then is flat again across the bottom. Well, actually Phrancko sweater patterns are never completely that way since there are always a couple of rows of rounding at the top and then a diagonal section at the bottom. But nevertheless, the collapse of the shaping into straight sides bothered me. So I took another look at the algorithm.

How did the shape change?

How different is it?

The change is actually very slight, amazingly enough. In fact it deviates only one stitch away on each side from what the pattern formerly did. Here is a mapping of one side of the sleeve cap which compares the original shaping with the new shaping: 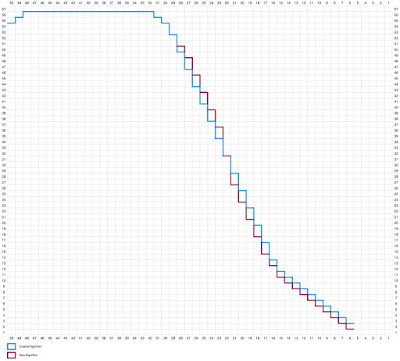 How has the pattern changed?

The only part of the pattern that changed is the Sleeve Cap Shaping section. Here are the instructions from the earlier version of the pattern for the sweater I am currently working on:

CONSTRUCTION NOTE—Work increases as follows (these incs are on the sleeve cap, not on the body):

Shape the caps as follows:

As you see, it's a 2/3/2 stage pattern where the Standard size (the bolded numbers) has only one repeat in the first stage and zero repeats in the third stage, reducing it to almost a straight line--not exactly a bell-shaped curve.

And here are the instructions from the updated version of the pattern:

Shape the caps as follows:

So now we have a 2/3/5/3/2 stage pattern where every stage has a few repeats. Even if it doesn't make much difference in the actual shape of the cap, I find that much more satisfying as a bell-shaped set-in sleeve cap.

For comparison, the diagram above is made precisely from the Standard size of these two variants of the pattern I am currently working.

And a final note

If you download your pattern now, you will get the latest version. However, since the change was localized to this section of the sweater, I was able to preserve the previous version for anyone who has started the older version without printing it and is still in the middle of the sleeve caps. There is a link in the header box that will allow you to revert to the older version. This link will not be there forever, however. So I hope anyone who is in that state will print the older version of the pattern now, before it goes away.

Let me know what you think of this blog entry here. Please go to Phrancko Sweater Knitters Forum for more general questions and comments about the Phrancko.com website.

Phrancko
I did not discover my passion for knitting until I was in my late 60's and retired from my software development career. Once I caught the knitting bug, I could not learn enough! I was very fortunate to learn of the TKGA Master Hand Knitters certification (https://tkga.org). I signed up immediately and worked on it every day for two years and became certified in 2017. It absolutely changed my life in retirement. In fact, I no longer consider myself retired. I am now a professional Knitwear Designer and the developer of Phrancko.com, which combines the two vocational passions of my life, knitting and software development.